And that's how the Grinch movie begins, one of Noa's favorites since childhood, where a girl, cindy lou who hair, investigates why the Grinch hates Christmas.

The costume Consists of a red cape, a dress, red pantyhose,white socks and as accessories white plush earmuffs, a headband with a cup and plush pink mittens.

I found a piece of red polar fabric on the market at a good price and bought it for myself. I was afraid of not being able to get a cape with enough flight, but I did it.

The cape has two front openings for the arms, which are topped with a view. The hood is bordered by white marabou (feather headband).

It closes at the front with a red tracksuit-style cord,which ends in two white fur pom poms.

The cape has no lining. The seams, apart from being overcast, are sewn with an ornamental stitching.

The dress is large squares made with tablecloth fabric. The original fabric is green and white squares with trees (triangles).

The making is simple. The body has darts, a round neckline and short sleeves. The skirt has a lot of flight and the petticoat has a lot of tulle

We had bought fabric to make a Grinch backpack, but there was no way he could carry it. Outside the cape he could not put on the handle sand inside he made a hump. Therefore, large pockets were superimposed on her dress, with Velcro so that she could safely store her cell phone and money.

As I had not planned to make pockets, the skirt has two seams, one in the front center and one in the back center, which is where the zipper goes. I did it this way to have the maximum amount of fabric possible in the skirt.

In these cases it is best to make pockets in the side seam and put an invisible zipper so that nothing escapes.

The most striking thing about this girl is her outfits with those "so discreet" hairstyles. Noa put on the "tall fountain" with the ear muffs, and only the braids with the cup headband

I made the headband with a set of cups from my daughters, a "caramel" stick, a spoon and a cookie. Everything is glued with double-sided tape. The plate with the food on her lap would also be missing, because both Cindy Lou and her parents are supposed to go tablecloth with the food on

Without her hairstyle, Noa says that she looks like a little red riding hood, a little overconfident, because of the marabou. 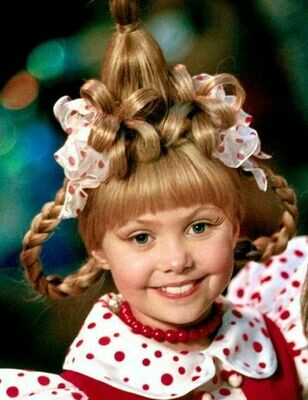 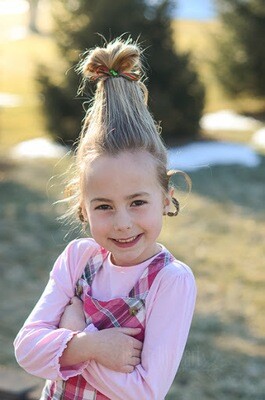 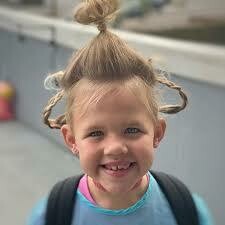